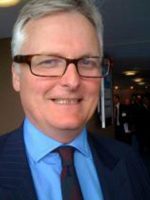 Nigel worked in the Lloyd’s community both as a broker and members’ agent from 1983 to 2009, latterly being Chairman of Hampden Members’ Agency. He is now a director of HIPCC (Guernsey) Ltd, a Guernsey-based protected cell company offering reinsurance products to investors at Lloyd’s. He is also the majority shareholder of  its holding company which he jointly owns with Hampden Capital Plc. Currently he also holds the position of CEO of Helios Underwriting PLC, an AIM-listed holding company of wholly owned corporate members of Lloyd’s, in which he is a major shareholder.

Nigel joined Lloyd’s in 1978, and now underwrites through two NameCos and an LLP, in which vehicle he has been joined by his son and two daughters. He has served on the ALM board since 1998. He is also a founder member of the High Premium Group and was appointed a member of its Committee in 2009. As a working member of Lloyd’s until 2009, he was twice elected to the Council of Lloyd’s, serving from 1999 to 2001 and from 2005 to 2007. He also served on various Lloyd’s-related boards, committees and working parties.