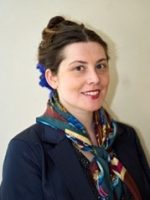 Venetia has been a member of Lloyd’s since 2009, on her family’s underwriting vehicle.

In 2017 she set up a Nameco as co-director with other family members and purchased another vehicle in 2021. She gained work experience in the Lloyd’s market with an internship with Argenta in 2015-2016, and a short placement with Tokio Marine Kiln in February 2016. She has since worked in investment management, marketing research and academia.

Venetia received a doctorate in Anthropology from the University of Oxford in 2015, where she also completed her MSc in Social Anthropology in 2011. The subject of her research was Catalan nationalism and cuisine. She published a book based on her research in 2019, Nourishing the Nation: Food as National Identity in Catalonia, which came out in paperback in 2022. She holds a BSc (Hons) in Business Management from the Royal Agricultural University. She is also Secretary of the Institute of International Monetary Research at the University of Buckingham.

Alongside contributing to the running of her family’s assets in Lloyd’s and forestry, she spends her time enjoying rural Gloucestershire with her two young sons.