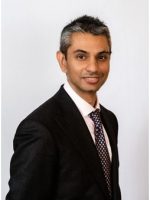 Dhruv has been an underwriting member of Lloyds via a family LLP, that he set up, since 2010.

He studied Computing at Imperial College and also holds a PGCert in Natural Hazards for Insurers from UCL. Following a graduate job at the investment bank Barclays Capital he started his own property business and he also contributes to his family’s pharmacy business. He was elected as Common Councilman of the City of London Corporation for Aldgate Ward from 2013-2021 during which time he chaired the Community and Children’s Services Committee, and the City Bridge Trust committee (London’s largest grantmaker to charities).

He is a Member of the Institution of Engineering and Technology, a Chartered Building Engineer, and a Liveryman and Trustee of the Clothworkers’ Company and Foundation. He was awarded an OBE in 2018 for voluntary service to the British Hindu community and to Social Cohesion.