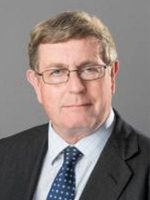 David started his City career at Lazard in 1983 after five years in the Royal Green Jackets. He worked in corporate finance at Lazard until 2000. He ran the Asian business for Lazard from 1998 to 2000. From 1995 to 1996 he led the Lazard team advising the Council of Lloyd’s on Reconstruction and Renewal and the creation of Equitas. After two years at Vodafone David returned to the City and worked at Cazenove (and JP Morgan Cazenove) until 2008. David then set up his own corporate finance business, EPL Advisory LLP. He advised the members’ agents on private capital matters in 2012. He is also Chairman  of Howe Robinson Partners, a shipbroker, and a director of various private companies.

He acquired a Lloyd’s LLP in 2010 and continues to underwrite through that vehicle. He joined the ALM board in 2013.